This is Willow and I have been called to share with the Participants of this sacred Journey about the Power of Sound and Mantra. As my personal path has mainly (but not limited to) been guided by the Eastern Schools of Knowledge (Taoism, Hinduism, Ayurveda/Yoga, Buddism), I have been called to share two Mantras in particular; The GAYATRI Mantra and The MOOLA Mantra, for All to familiarize themselves with prior to our Work together.

MANTRA means “Protection for the Mind” and utilizes Sacred Sound and Light Language to provide this function. Mantras enable us, through the use of Sound Vibration and Sacred Light Languages, to progress swiftly through the stages of the spiritual path, by protecting our mind against ordinary conceptions.

MANTRA enhances and energizes our physical, mental, emotional and spiritual essence; assisting us in reaching deeper states of consciousness and awareness.

Throughout most ancient Sacred Texts and Scriptures you will find written that Sound is the Source of all Being; Vibration is the basis of our Reality. Religious and mythical paths on this planet have awareness that Sound is the principal Creative Force of the Universe.

Here are a few examples:

NEW TESTAMENT: “In the Beginning was the WORD and the Word was GOD”

VEDAS: “In the Beginning was Brahman with whom was the WORD and the Word was BRAHMAN”

OLD TESTAMENT: “Let There Be Light”. We are told, Sound is the first creative Act of God, preceeding the manifestation of Light; it is the ACT of speaking that creates the Energy of Light.

HOPI LEGEND: The story of SpiderWoman who SANG the song of Creation over all the inanimate forms on the Planet and brought them to Life.

MAYAN HOLY BOOK, POPOL VUH: The First Men and Women were created through the Power of Sound.

ANCIENT EGYPTIAN TEXTS: Thoth would think of an Object, SPEAK it’s name and Bring it into Being. 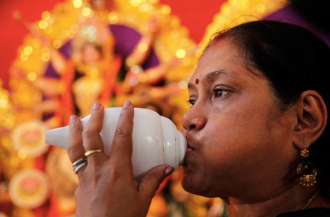 HEBREW PATH OF KABBALAH: An Object and it’s true Name are Identical.

And, In the East, Gods and Goddesses blow conch shells and hit giant gongs, bringing The Universe into Creation.

Last night as I opened The Book of Knowledge: The Keys of Enoch, written through J.J. Hurtak, I was guided to Keys 1-1-0 and 1-1-1; both which address the power and use of Mantra and Sacred Languages of Light. Here are a couple of excerps:

1-1-0:20    “The Mantra Vibrations raise the body consciousness into the seed crystal mind so that it spirals out of our consciousness paradigm which is controlled by the energy of the Black Cube. And by going through the Light Pyramids on this life station, the mind of consciousness is able to pass from lower pyramidal creation into greater light-life stations on other dimensional or Metatronic levels of Creation.”

Gayatri Mantra (the mother of the vedas), the foremost mantra in hinduism and hindu beliefs, inspires wisdom. Its meaning is:

“May the Almighty God illuminate our intellect to lead us along the righteous path”.

“Oh God! Thou art the Giver of Life,  Remover of pain and sorrow, The Bestower of happiness, Oh! Creator of the Universe, May we receive thy supreme sin-destroying light, May Thou guide our intellect in the right direction.”

The mantra is also a prayer to the “giver of light and life” – the Sun (savitur).

Gayatri, the five-faced Goddess, is said to have domain over the five senses or pranas, and protects these five life-forces of those who chant the Gayatri Mantra. In her role as the protector, Gayatri is referred to as Savitri. 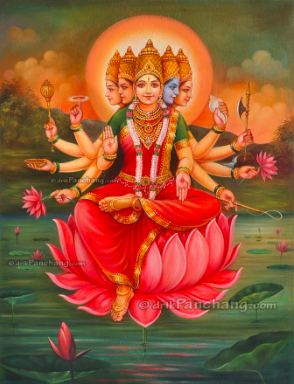 Origin of the Gayatri Mantra

The Vedas are widely considered to be the source of all true knowledge, the word “Veda” itself meaning “Knowledge”. Gayatri Devi also gave to mankind the “Gayatri Mantra”, also known as the “Guru Mantra” or the “Savitri Mantra”. It is one of the oldest mantras, and generally thought of as being amongst the highest and most powerful mantras of all. This mantra is therefore often referred to as “the Mother of the Vedas”. In the Bhagavad Gita, Lord Krishna had proclaimed to Arjuna – “Among all the mantras, I am the Gayatri”.

Chanting of the Gayatri Mantra

The ideal times for chanting the mantra are three times a day – at dawn, mid-day, and at dusk. These times are known as the three sandhyas – morning, mid-day and evening. The maximum benefit of chanting the mantra is said to be obtained by chanting it 108 times. However, one may chant it for 3, 9, or 18 times when pressed for time.

Rishis selected the words of the Gayatri Mantra and arranged them so that they not only convey meaning but also create specific power of righteous wisdom through their utterance. Chanting of Gayatri Mantra removes all obstacles in our path to increased wisdom and spiritual growth and development. The teachings and powers incorporated in the Gayatri Mantra fulfill this purpose. Righteous wisdom starts emerging soon after Jap(recitation) of the Gayatri Mantra is performed.The syllables of the mantra are said to positively affect all the chakras or energy centres in the human body – hence, proper pronunciation and enunciation are very important. Sathya Sai Baba teaches that the Gayatri Mantra “will protect you from harm wherever you are, make your intellect shine, improve your power of speech, and dispel the darkness of ignorance (Dhiyoyonah prachodayaath)”.

This mantra contains enormous potential power; it has the ability to expand your awareness and raise your level of consciousness, thus benefiting ALL of Mankind.

This mantra is a direct link to the living God, the Supreme Being, and Creator of this Glorious Universe.

Chant this mantra with meaning and intent. Allow the wellspring of love that arises within you to flow out into the world. This mantra will fill you with love, peace, and joy.

Om — We are calling on the highest energy of all

Chit — Infinite Consciousness of the Universe

Purushothama — Who has incarnated in human form to help guide mankind

Paramatma — Who comes to me in my heart, and becomes my inner voice whenever I ask

Sri Bhagavati — The Divine Mother, the power aspect of creation

Same tha — Together within Non-Duality

Sri Bhagavate — The Father of Creation which is unchangeable and permanent

Namaha— I thank you and acknowledge this presence in my life. I ask for your guidance at all times

Practicing the mudra and the mantra properly will optimize the energy flow and will make this meditation all the more potent.

Posture: Sit in Easy Pose (sitting on the floor, with legs crossed) or in a chair with feet planted firmly on the ground, with the spine straight, and a light Neck Lock applied (chin pulled back slightly).

Mudra: The mudra (hand position) is most important. The elbows are bent down by the sides, and are tucked comfortably but firmly against the ribs. The forearms are almost perpendicular to the floor, with the hands extended out at a 45 degree angle from the center of the body. Most importantly, the palms are perfectly flat, facing up, hands bent back at the wrists. You should feel a pull in the lowest part of your forearm as you almost hyper-extend your wrist to make the palms flat. (This tends to be the most challenging part of the meditation so it is important not to let the hands relax out of the position.) The fingers are kept side by side, except that the thumb is spread from the other four fingers.

So – Personal sense of merger and identity

Hung – The infinite, vibrating and real.

This mantra taps into the energies of the sun, moon, earth, and the Infinite Spirit to bring deep healing. It is important to pull the navel point powerfully on the word Hung. Note that the word Hung is not long and drawn out. Rather, it is clipped off forcefully as you pull in the navel. Chant one complete cycle of the entire mantra with each breath. Then deeply inhale and repeat. Remember to move the mouth precisely with each sound. Try to feel the resonance in the mouth and in the sinus area.

Mental Focus: You can choose to mentally visualize the person or persons that you are wanting to heal, as you send this energy to them for their well­-being.

Time: Continue chanting for 11 to 31 minutes.

To End: To end the meditation, inhale deeply and hold the breath, as you offer a healing prayer. Visualize the person you wish to heal as being totally healthy, radiant, and strong. See the person completely engulfed in a healing white light and completely healed. Then exhale and inhale deeply again, hold the breath, and offer the same prayer again. Exhale, inhale, and hold, repeat the prayer, and exhale.

To complete, inhale deeply, stretch your arms up high, and vigorously shake out your hands and fingers for several seconds. Keep the arms up and hands shaking as you exhale. Repeat two more times and relax.

© The Teachings of Yogi Bhajan

OM, the primordial sound, resides in all elements of the universe. It permeates the earth (bhuh), water (bhuvah), fire (svaha), air (mahah), ether (janah), intelligence (tapah) and consciousness (satyam). We invoke and meditate on the glory of that Being who has produced this universe, may He/She enlighten our minds.

Om is the prime mantra of the Purusha, the Cosmic Being, the Atman or the Higher Self. As such it attunes with our true nature and higher reality. It reflects both the manifest and unmanifest Brahman, sustaining the vibration of being, life and consciousness in all worlds and all creatures.

I So look forward to our sacred journey and work together in Teotihuacan for the 2018 SACRED AND POWERFUL Spring Equinox!! Please study and practice these mantras as we will utilize them in our Work together. For  more information about our Pilgrimage CLICK HERE

We also encourage those Called to this Pilgrimage to bring sacred instruments such as singing bowls, drums, rattles etc to assist in the creation of Sacred Sound Vibration Vortexes.